Former President Donald Trump said Friday that the U.S. Supreme Court was able to overturn the Roe v. Wade decision concluding that there is no constitutional right to abortion not just because he appointed three constitutionalist justices to the high court during his presidency but because “God made the decision.”

Fox News asked the former president if he thinks he played a role in the reversal of the landmark 1973 decision because he appointed Justices Neil Gorsuch, Brett Kavanaugh and Amy Coney Barrett to the Supreme Court, but Trump responded by saying, “God made the decision.”

Asked what he would like to say to his supporters, Trump said, “I think, in the end, this is something that will work out for everybody.”
He added, “This brings everything back to the states where it has always belonged.”

In a decision released Friday in the case of Thomas Dobbs, et. al. v. Jackson Women’s Health Organization, the high court ruled 6-3 to uphold Mississippi’s Gestational Age Act, which bans most abortions after 15 weeks into a pregnancy.

In a statement issued by his political action committee, Trump said, “I did not cave to the Radical Left Democrats, their partners in the Fake News Media, or the RINOs who are likewise the true, but silent, enemy of the people.”

In its 213-page decision, the court said: “Held: The Constitution does not confer a right to abortion; Roe and Casey are overruled; and the authority to regulate abortion is returned to the people and their elected representatives,” 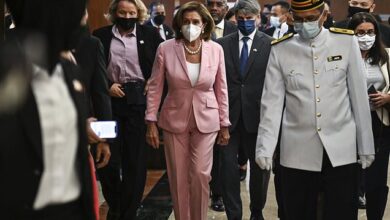