The Agency deployed its Response Team to a scene where an articulated truck laden with 33,000litres of premium motor spirit fell sideways while driving up the hilly road at the Toll-gate inward Lagos Abeokuta ExpressWay today, Thursday, 6th October, 2022.

Investigation conducted by the Agency’s Response Team revealed the immediate cause of the incident was due to mechanical fault (brake failure) which led to the PMS leaking from the truck.
The leaked products after having contact with some combustible items led to the inferno.

Unfortunately, two adult males lost their lives in the incident who were extricated from the burnt vehicles by the LASEMA Response Team.

– several numbers of shops including kiosks, and makeup shops were razed down.

Further information gathered at the scene revealed the Mazda bus due to reckless driving and over speeding hit the Prado jeep which inturn had a collision with the Crosstor.

The impact of the collision resulted to 3 adults sustaining serious injuries and were rushed to the Truma Center while four other victims that sustained minor injures were administered first aid treatment by the Agency’s Paramedics.
Fortunately, no loss of lives was recorded.

Other Agencies at the scene were LASTMA, LASAMBUS,FRSC, Police and NEMA. 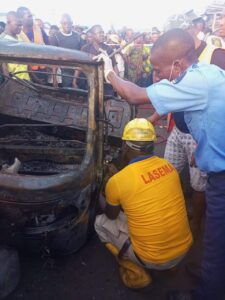 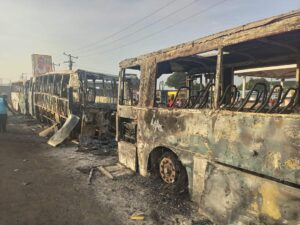 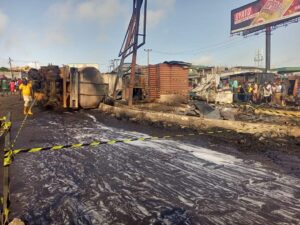 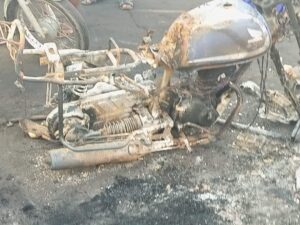 FRSC Thanks Army For Training Personnel