Civil rights advocacy group, Human Rights Writers Association of Nigeria (HURIWA), on Sunday, lambasted security agents and the Federal Government for being dishonest in its fight against banditry and insurgency in the country. HURIWA also accused heads of security agencies who are mostly Moslem Northerners of looking the other way as Fulani terrorists import sophisticated weapons into Nigeria through the North West with which they use to terrorise Nigerians.

HURIWA, in a statement by its National Coordinator, Comrade Emmanuel Onwubiko, said it was hypocritical of the regime of President Muhammadu Buhari to continue persecuting the leader of the Indigenous People of Biafra, Nnamdi Kanu; while leaving notorious bandit kingpin, Bello Turji, to continue terrorising residents of North-West zone.

The group said Turji, emboldened by the fact that security agents have continuously failed to arrest him, granted a full-fledged interview to Daily Trust recently, detailing his criminality and his many deadly assaults on innocent Nigerians. HURIWA carpeted the National Broadcasting Commission for doing nothing even after the terrorist was granted live interview but the same NBC almost took away the licence if Chajnels television just for interviewing the Spokesoerson the Indigenous People of Biafra (IPOB) Comrade Emma Powerful. HURIWA said the current administration is full of double standards.

HURIWA’s Onwubiko said, “It is unthinkable that Fulani bandits and terrorists continue to wreak havoc on Nigerians yet they are spared by security agents who flex muscle to victimize a self-determination agitator in the person of Kanu.

“Whereas terrorism is a world crime, self-determination is legally recognized by the constitution and Article 20 of the African Charter on Human and Peoples’ Rights which states thus: “All peoples shall have the right to existence. They shall have the unquestionable and inalienable right to self-determination. They shall freely determine their political status and shall pursue their economic and social development according to the policy they have freely chosen.

“The persistent threats posed by armed Fulani herdsmen across the country is alarming and they are having a field day because security agents look away. The fact that till date, not a single of the armed Fulani herdsmen responsible for hundreds of deaths has been arrested, prosecuted and punished press home this point.

“Where are the 400 Bureau De Change operators indicted for terror financing? Has the Attorney General of the Federation and Minister of Justice, Abubakar Malami (SAN), published their names or prosecuted them for over a year now?

“It is, however, ironical that the same minister has been illegally prosecuting Kanu for over eight months now since the IPOB leader was abducted from Kenya has continuous demonised the leader of IPOB in the media.

“President Buhari, Malami, security agents must be patriotic enough to fish out Bello Turji and his gang. If a reporter without arms from Daily trust can locate Turji, what excuse does our security agents have not to bring down the notorious terrorist? A criminal who should be sent to where he belongs now grants television interviews like a celebrity because of his tribe. It is sad.

“It is again unfortunate that for about a month since brazen Fulani herdsmen invaded some communities in the Logo Local Government Area of Benue State, forcibly displacing autochthonous dwellers to plan permanent settlement, security agents have not arrested any of the invaders. FULANI herdsmen are busy killing citizens all across Nigeria but the Federal Government pampers them.

“The President and the entire heads of internal security agencies who are all Fulani and Moslem northerners should blame themselves for allowing Fulani herdsmen to amass weapons of mass destruction at the disadvantage of the nation’s armed forces.

“There should be an honest, patriotic, transparent and open investigation by the National Assembly to resolve this huge threat which may undermine the conduct of the 2023 polls.”

Obaseki: PDP Does Not Belong To Wike 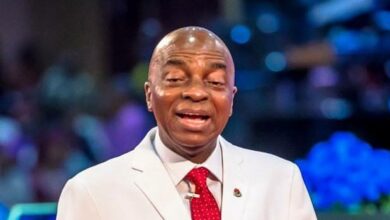