Manchester United striker, Cristiano Ronaldo, has been named the English Premier League Player of the Month for September.

Since his second return to United, the Portuguese has scored four goals which were very vital for the club.

Thanking his fellow teammates after he was named with the award, Ronaldo took to social media saying, “Proud to be elected Player Of The Month among so many great players in the Premier League. Thanks to all my teammates at Man. United, couldn’t have done it without them. Let’s keep working hard and the results will come!” 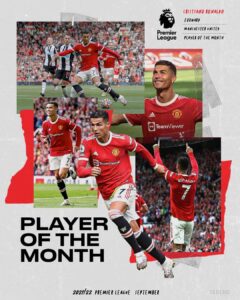 I Refused To Be Used, They Want To Finish Me, Says BBNaija Winner Efe