A pregnant woman, who fell into labour along Ozumba Mbadiwe Road, Victoria Island, while in transit on a public bus from Awoyaya in Ibeju-Lekki Local Government to Orile, has been delivered of a baby by Lagos State Ambulance Service (LASAMBUS) officials.

The woman, 27-year-old Shukarat Isa, a resident of 30 Akin Akinsheyinwa Street, Awoyaya, Lagos and the male child weighing 3.3kg, have since been taken to the Ikate Health Centre for further care and management.

Speaking after receiving a report of the successful medical emergency response by the LASAMBUS team, the Lagos State Commissioner for Health, Prof. Akin Abayomi, explained that the incident occurred yesterday around the Law School Bus Stop on Victoria Island.

According to him, “LASAMBUS received the distress call of a pregnant woman in labour at 8.02am and promptly dispatched its closest response team to the venue of the incident. The team arrived the scene, the Law School Bus Stop, at 8:16 am and quickly set parameters for the emergency response, helping the woman to deliver both the baby and the placenta”.

Prof. Abayomi noted that the team observed basic medical emergency procedures on the spot before conveying the mother and child to the Ikate Health Centre for further management.

The Commissioner said: “This is a typical case of an obstetric emergency which may arise at any time during pregnancy, labour and birth. The Lagos State Government realising the pivotal role of prompt emergency response, including transport of pregnant women during critical obstetric emergencies, in preventing maternal and child deaths, has continued to expand its ambulance services to offer prompt emergency service to residents”.

Expressing delight about the feat performed by the LASAMBUS team, Abayomi spoke further saying “We are happy that our investment and effort in overhauling the Lagos State Ambulance Service is yielding the desired results. News such as this is cheering and heart-warming as it adds up to improve our health indices and showcase our resolve to provide efficient and equitable service delivery to Lagosians”.

Speaking in the same vein, the Permanent Secretary, Ministry of Health, Dr. Olusegun Ogboye, disclosed that the State Government is currently reviewing the performance of the ambulance service and implementing a strategic plan to significantly improve service delivery, response time and the quality of care delivered by the service to reduce morbidity and mortality from emergencies.

He also stated that the Sanwo-Olu administration has put words into action by commencing an overhaul of the ambulance service with new state-of-the-art ambulances and equipment to further sharpen the operations of LASMABUS in addition to comprehensive and continuous capacity development of its staff for improved performance.

“With over 200 staff, 25 ambulance points and a fleet of ambulances strategically located across the State, the Lagos State Ambulance Service is poised to provide prompt pre-hospital and emergency healthcare to Lagosians. Ours is a 24-hour medical emergency response service including weekends and public holidays”, Dr. Ogboye said.

Giving an account of the incident, the rescued woman, Shukarat Isa, explained that she was in transit from Awoyaya in Ibeju-Lekki Local Government area to Orile on a public bus when she went into labour.

Her words, “I was on a bus to Orile from Awoyaya, I fell into labour in the course of the journey and a man sitting beside me called the emergency number and requested help. The vehicle had a stop at the Law School Bus Stop for some passengers to disembark and this was where the LASAMBUS officials caught up with the vehicle and assisted with the delivery, which was already in process.

“The team also assisted in cleaning me and my baby up before transporting us to Ikate Health Centre at Elegushi. At Ikate Health Centre, the nurses stayed with us and assisted with my admission and baby immunisation before leaving. I have since been discharged and my baby and I are doing quite well. I would like to appreciate the medical team for their response and care, it means a lot to me and my family.” 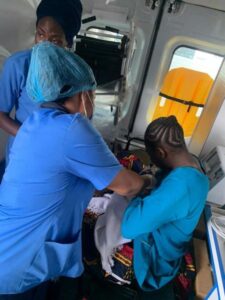 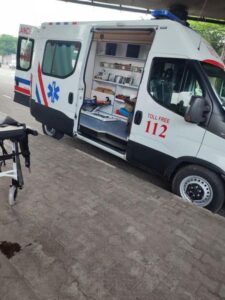 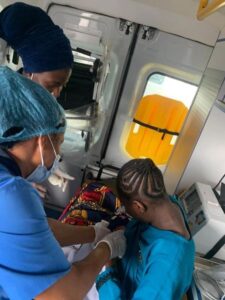 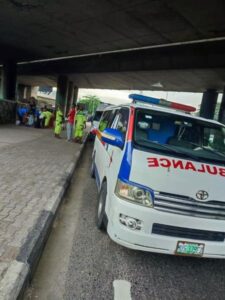 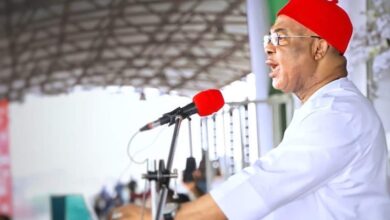 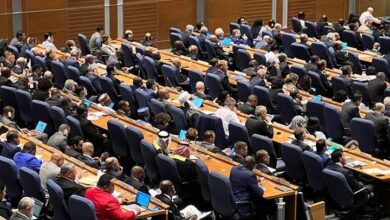