In a prompt response to The King’s Meat, the author Sam Omatseye gets a blast from a responder who notes that if his
fulltime job right now is to vilify Osinbajo, he and his ilk will not have the field to themselves

Sam Omatseye, is this what informed commentary has been reduced to? You want people to read this poor hitjob of a Bola Tinubu hagiography mounted on cheap lies against Yemi Osinbajo and nod in admiration of your hackwork? Nah, this is poor, very poor. Only a small man and a small mind will seek to diminish another in order to grow.

I mean, how dare you call a man who has exercised utmost discipline and self-control in the face of provocation from you and your principal’s brood of vipers a coward? You think those who support Osinbajo will keep mute when he’s being eaten alive by you and other Tinubu’s worms calling him a traitor, a Judas, an ingrate, a black sheep?

What fear of gratitude are you talking about? Who the hell is Tinubu but an entitled thief protected by the establishment that has so far used him to serve their political ends until now? Not everyone worships a moral leper, Mr Omatseye. Mr Tinubu is the same fellow who has serially betrayed the Yoruba and indeed, Nigerians from June 12 to Afenifere twice over. No one bothered collaring him with charges of treachery because we recognize that he is entitled to his choices in a democracy. He cannot even lace up Akintola’s shoes talk less of Awolowo’s. You may not know it today because your face is still buried in Tinubu’s stew, but he is not there in the constellation of true Yoruba and Nigerian stars. He’s a political blight better left to burn out, a true waste. Of course, he’s got tons of money stashed in bullion vans all over the place, but that’s all he’s got. Nothing else.

I know that in your eyes, apart from Osinbajo daring to sniff at your king’s meat, his other crime is that he is loyal to President Buhari when Buhari will not budge in the face of Tinubu’s blackmail. You have created this phantom of an omnipotent Tinubu who distributes favours to all – including to the president and vice president – and who is now being betrayed by those whose duty it is to crown him the king of Nigeria.

Only an idiot would believe that Tinubu singularly made Osinbajo vice president when the whole world knew that Tinubu himself wanted the position but was thwarted on the ground that a Muslim-Muslim ticket won’t fly. The unvarnished truth is that the position of the vice president was not Tinubu’s to offer to anyone. He was only one of the influential people who proposed Osinbajo for the post, even though in his own case, he did it grudgingly. The man with the last say on who he’d want to serve as vice president was the president himself and he ultimately chose and accepted Osinbajo. Tinubu, like a number of others, had a hand in getting Osinbajo to be considered, he cannot claim sole credit. And yes, Osinbajo never said Tinubu had no hand in him emerging vice president; he only mentioned others involved. Just in case you have forgotten, it’s a democracy and many people and many interests contribute to such outcomes, like who will be vice president, just as they do with regard to who will be president.

You cluck effortlessly that there is right and there is decency, but then promptly, in the same breath, deny the vice president his right in a most indecent piece that shoos away every sense of reason and fairness. You airily say no one has a pact to run for president, but, in the same breath, you’re ‘dragging’ Vice President Yemi Osinbajo for not handing the APC presidential ticket to Tinubu as of right because there is a pact based on his knowledge that Tinubu has been eyeing the position since forever. I mean, why do you think the vice president has a moral duty (or any duty of any hue) to go to Tinubu to inform him of his ambition for the presidency simply because you have built up these empty chronological verses of him knowing for eons that Tinubu wants the position after Buhari? Is the presidency a Tinubu heritage?

Honestly, you guys are getting tirelessly pathetic in your apple-polishing gimmickry. You’re taking Nigerians for fools because you’re good with the pen. Okay, let me tell you in plain language what you should know: Yemi Osinbajo as the vice president of the Federal Republic of Nigeria has a right to contest the presidential primary of the APC against anybody and he does not need anybody’s permission to throw his hat in the ring!

If your principal is the great democrat he is being touted to be, put away these dirty inks and tell the world his qualities. So far, all you’ve told us indirectly is that he has an “audacious vision of justice in Lagos” and that he is the inventor of school meals. So, what else? What is he bringing to the national table, apart from a sense of entitlement? Tell us why he would make a great president of Nigeria. Debate the issues and stop attacking Osinbajo for daring to declare his intention to democratically contest for the only position presently above him (after serving as an understudy for that position for more than seven years) just because you think he’s Tinubu’s eternal servant. He is not. At least that is what his declaration has showed.
So, raise your game, Uncle Sam. The gutter isn’t the place for this fine prose. Osinbajo isn’t campaigning to run a cuckoo’s nest. He’s campaigning to be given the opportunity to run a country, our country, Nigeria, not Tinubu’s agbado farm. We are democracy, not a slaughter house for your king’s meat.

The Illusion Of Southern Preidency By Femi Fani-Kayode 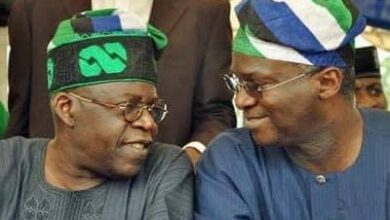