Bayo Onanuga, the Director Media and Publicity of the All Progressives Congress presidential campaign council, has said media houses who spread a fake statement by the Independent National Electoral Commission, INEC, about the party’s candidate, Asiwaju Bola Tinubu, will be dragged to court soon.

The purported statement had said INEC was in talks with the US about documents linking Tinubu to drug business.

The statement was denied by INEC as seen below. 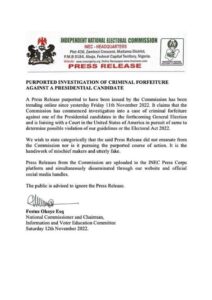 Reacting, Onanuga stated that those who spread the document were working for other presidential candidates.

He wrote on Facebook, “All those people, including Arise TV, BusinessDay and Channels TV spreading fake news and assassinating the character of Asíwájú Tinubu will meet us in court sooner than later.

“You have all thrown professionalism and objectivity to Jabi Lake because you are playing the script of your master puppeteers, Atiku and Peter Obi.

“The height of your shenanigans today was the wide use of a fake INEC statement.

“Shame on you all. See the INEC denial…”