The Minister of Information and Culture, Alhaji Lai Mohammed, has inaugurated the Governing Board of the National Broadcasting Commission (NBC), with a call on the commission to scale up its regulatory role ahead of the 2023 general elections.

“Please note that as we move closer to the 2023 general elections, the NBC will come under increasing pressure to step up its regulatory role to prevent a repeat of what transpired before, during and after the
2019 general elections, when some broadcast stations threw caution to the wind and engaged in inciting, incendiary and unprofessional broadcasts.

”It is important for the Commission to ensure that its licensees adhere strictly to the tenets of the Broadcasting Code,” the Minister said while inaugurating the Board in Abuja on Thursday.

He also called on the Board to develop relevant policies that will drive the implementation of the Digital Switch Over (DSO), which is the flagship project of the NBC.

“We have an ambitious plan to fast-track the DSO this year by launching it in at least two states every month. Unfortunately, we have not been able to meet this target. But we are working hard to resume the DSO launch as soon as possible. I urge you all to buy into this project to ensure that NBC is able to deliver on what we perceive as a legacy project – because it will change the face of broadcasting in Nigeria,” Alhaji Mohammed said.

He urged the members of new NBC Board to maintain a cordial relationship with the management, and to strictly adhere to their

roles in policy formulation and refrain from getting involved in the the day-to-day running of the organization.

“Please note that the role of the board of any organization is to formulate policies, and not to engage in the day-to-day running of the organization. The Board is to evolve strategic ways of supporting the commission so it can most effectively deliver its mandate. I therefore enjoin you all to maintain a cordial relationship with the Chief Executive Officer of the Commission to engender a smooth working relationship,” the Minister said.

In his remarks on behalf of the Board, the Chairman, Mr. Bashir Omolaja Bolarinwa, thanked President Muhammadu Buhari for finding them worthy to serve.

He pledged the readiness of the Board members to work with the management of the NBC as well as the Ministerial Task Force on the DSO to ensure the success of the project.

The inauguration of the Board was attended by the Permanent Secretary, Federal Ministry of Information and Culture, Dr. Ifeoma Adaora Anyanwutaku, and the Senator representing Adamawa Central, Hajia Aisha Dahiru, among other dignitaries.

Army Slams Soldier In Viral Video, Accuse Him Of Cowardice 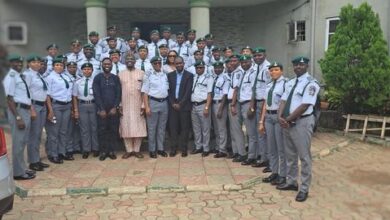