Lagos State Deputy Governor, Dr. Kadri Obafemi Hamzat, has called on religious leaders in the State to focus their sermons on the importance of personal responsibility and family values in a bid to tackle the myriads of problems facing the country.

Speaking over the weekend at the commissioning of the Ultra-Modern Quranic Central Mosque and Turbaning of Admiral Jubrila Ayinla and his wife, Alhaja Jemilah Ayinla, as the New Baba Adinni and Amira Tul-Mehmeen of Quranic Muslim Community respectively, Dr. Hamzat emphasised that lack of personal responsibility is becoming an issue in the country and must be addressed for the required progress and development.

Hamzat said: “A lot of people are of the opinion that the problem of Nigeria is leadership. Well, l want to say that, it is not 100% correct in my view. The problem is that the family has broken up and there is a lack of personal responsibility in the country. Many people have left their responsibilities undone which is having negative effects on the society and country at large”.

He, therefore, called on all citizens irrespective of their religion to take personal responsibility very important and play their roles effectively and efficiently, adding that leadership starts from the home which is the bedrock of any developed society.

In his paper titled: “Revisiting the Centrality of the Mosque and the Quran in Islam”, the Guest Speaker, Prof. Tajudeen Gbadamosi, stressed the importance of the Quran as a book of guidance that must be studied and inculcated by all Muslims.

He implored parents to learn from the guidance of the Holy Quran and follow the examples of the Prophets, who effectively guided their children to serve and worship the Almighty Allah for heavenly rewards, stressing the importance of paying attention to their children’s religious commitments for success in the hereafter.

Prof. Gbadamosi added that there is a need to establish classes for the study of the Quran for the benefit of all categories of worshippers – male, female, the young and old – saying that tutors should be engaged from reputable schools and centres across the country to teach the people.

Earlier in his welcome address, the Vice President, Quranic Central Mosque, Lagos, Alhaji Shakirudeen Olatunji Giwa, disclosed that the mosque was initially built in 1877, rebuilt and commissioned in 1987 and now reconstructed to ultra-modern standard through financial support received from members and non-members of the mosque.

He expressed appreciation to all who stood by them when renovation work was ongoing and thanked members of the working committee who devoted their time and energy to achieve the remarkable feat, stressing that the organisation will continue to seek support for the propagation of Islam in the State.

While congratulating the President of the Organisation, Admiral Jubrila Ayinla (Rtd.) and his wife, Alhaja Jemilah Ayinla, on their installation as Baba Adinni and Amira-Tu-Muhmeen of the Quranic Muslim Community respectively, the Vice President noted that the installation was in recognition and endorsement of their immense service and support to the organisation and to further serve as an impetus for more selfless service. 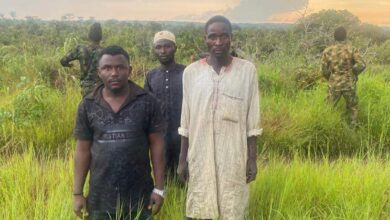