The Court of Appeal sitting in Abuja has nullified various factional congresses of the All Progressives Congress (APC) conducted in Sokoto State.

The appellate court also voided an earlier judgment by a Federal Capital Territory (FCT) High Court in suit No. FCT/HC/CV/3265, which was delivered on December 16, 2021, affirming Mr Mainasara Sani’s faction as the Sokoto APC executive.

The ruling by the appellate court affirmed Senator Aliyu Wamakko’s group, led by Alhaji Isa Achida, as the authentic Chairman and executive of the APC in Sokoto State.

The ruling by the appellate court affirmed Senator Aliyu Wamakko’s group, led by Alhaji Isa Achida, as the authentic Chairman and executive of the APC in Sokoto State.

Sirajo Abubakar emerged as another factional chairman in the party.

But delivering judgement on the matter, the presiding judge, Justice Haruna Simon Tsammani, who nullified the judgement of the FCT High Court, stated the court has no jurisdiction to entertain a matter on an issue that happened in Sokoto State.

“This court and the Supreme Court had in many occasions made pronouncement on matters of jurisdiction. Bringing these kind of cases, you are asking us to sit over our own judgement. We should know that where a matter happened, that is where it should be addressed.

“How can someone come all the way from Sokoto to Abuja on a matter that should be addressed there? It is all these kind of arrangements we frown at and even the Supreme Court frowns at it. I also strike out the suit on the basis of lack of jurisdiction.

“Federal High Court Abuja has jurisdiction only on matters arising from Abuja. FCT High Court has no jurisdiction to hear the matter. Any stake, including decision and judgement done at the high Court is a nullity,” Tsammani said.

Counsel to Alhaji Isa Achida, Dr Hassan Liman SAN, lauded the judgement. He said as a senior member of the legal profession, he will report lawyers who took the matter to the wrong court to the Nigerian Bar Association (NBA).

“I will report to the MBA. When members leave Sokoto State to file a case in Abuja you know what that means.

“No faction in Sokoto APC. The national body of the APC has the list of the officials of the state in their custody. Now that the Appeal Court has set aside the judgement of the Abuja High Court, the authentic leaders of the APC in Sokoto State will continue to exercise their duties,” Liman said. 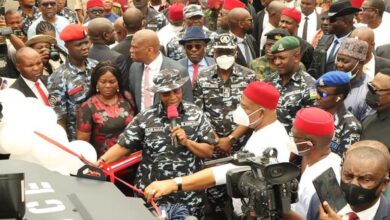